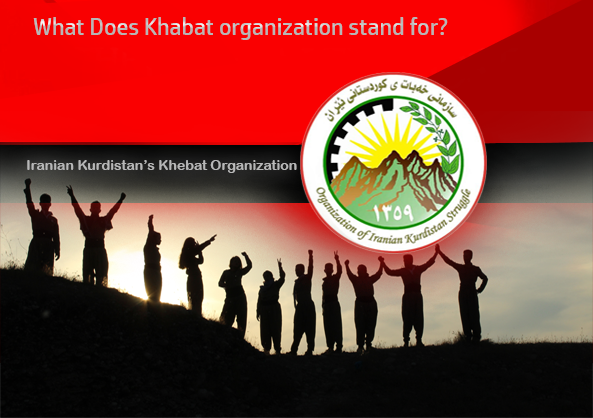 
At present, the party is led by its Secretary-General, Baba Sheikh Hosseini. Sazmani Khabat is one of Iranian Kurdistan s most famous parties fighting for the rights of the Kurds and seeks autonomy for Kurds in Iran. 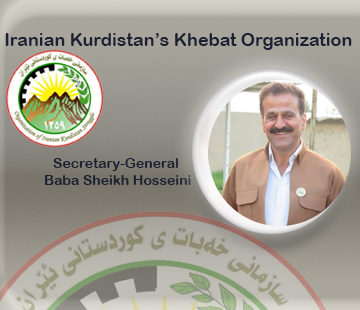 It operates from its bases in Iraq against the Akhondi dictator s regime to achieve the rights of the Kurdish people. At the beginning of the 1980s, a measure of autonomy was achieved in the Kurdish areas of western Iran after conflicts between Kurdish guerrillas and revolutionary guards, which resulted in the latter being recalled from Mahabad, Sanandaj and Kamyaran until a renewed government offensive allegedly fought in Kurdistan.  In the 1990s, armed conflicts continued between Sazmani xebat peshmerge and government forces, including bombing attacks against Iranian Kurds, both in western Iran and in Iraq.  Sazmani Xebat from the early days understood the plans and thoughts of the Iranian regime, that’s why the main and non changeable slogan of Sazmani Xebat is the elimination of the Iranian regime. Sazmani Xebat from the third congress changed its name from “Organization of National and Islamic Iranian Kurdistan Struggle” to Organization of Iranian Kurdistan Struggle. And the purpose is Sazmani Xebat believes that the religion should be kept away from government, and believes that all the religions should be respected and they should be utilized for writing the laws and rules of the government and their rights should be given.


Sazmani Xebat established many committees, centers and organizations, Women Organization of Iranian Kurdistan Khabat and Iranian Kurdistan Khabat Youth Organization are examples of those organizations. The percentage of women leadership is 30%, because Sazmani Xebat believes that the women should be given respectful positions to accomplish their duties and political activates and opportunities should be made for them so they can work to achieve more freedom and more of their rights. Sazmani Xebat is a organization for all the people of Kurdistan and we believes that the Kurdish nation in the Iranian Kurdistan is revolutionary and active and they struggle and fight for the freedom of the homeland. Sazmani Xebat recently held the sixth congress and we congratulate the people Kurdistan for its success and again renew covenant to struggle and fight for the elimination of Iran’s regime and to achieve rights and freedom for Kurds and Kurdistan, with new and up to date programs, schemes and projects for prosperity of our combat and struggle that accepted by the sixth congress. The below points are the main aims for the Organization of Iranian Kurdistan Struggle(Sazmani Xebat):


A. Sazmani Xebat struggles for establishing elected, democratic and parliamentary government, that be able to secure the rights of all the nations, religions, doctrines and genders.


B. Sazmani Xebat prefer the right of self-determination for the people of Kurdistan, and work to achieve autonomy for Kurdsitan in a democratic and parliamentary Iran and consider it as legitimate right.


C. The cooperation with other Kurdistani Organizations is one of the main missions, and Sazmani Xebat is ready for establishing any kind of help committees and teams with other organizations that will help to eliminate the Iranian regime and achieving rights and freedom for the citizens of Kurdistan.


D. Working and cooperation with the revolutionary Iranian Organizations is valuable and helpful, so after the elimination of the Iranian Akhond regime, support and work together in a free Iran, then evolution and science and development could be accomplished by a democratic government and that will lead up to end the war and inequality and achieving security and equality, and all the nations, religions, doctrines and citizens get their deserved rights.


E. Sazmani Xebat is supporting the struggles of other freedom demandant nations in Iran so they can achieve their rights in a free and democratic Iran without any external interventions.


H. Sazmani Xebat is a national organization and with faith in freedom, continues its national struggle, to achieve the rights and freedom for citizens of Kurdistan.